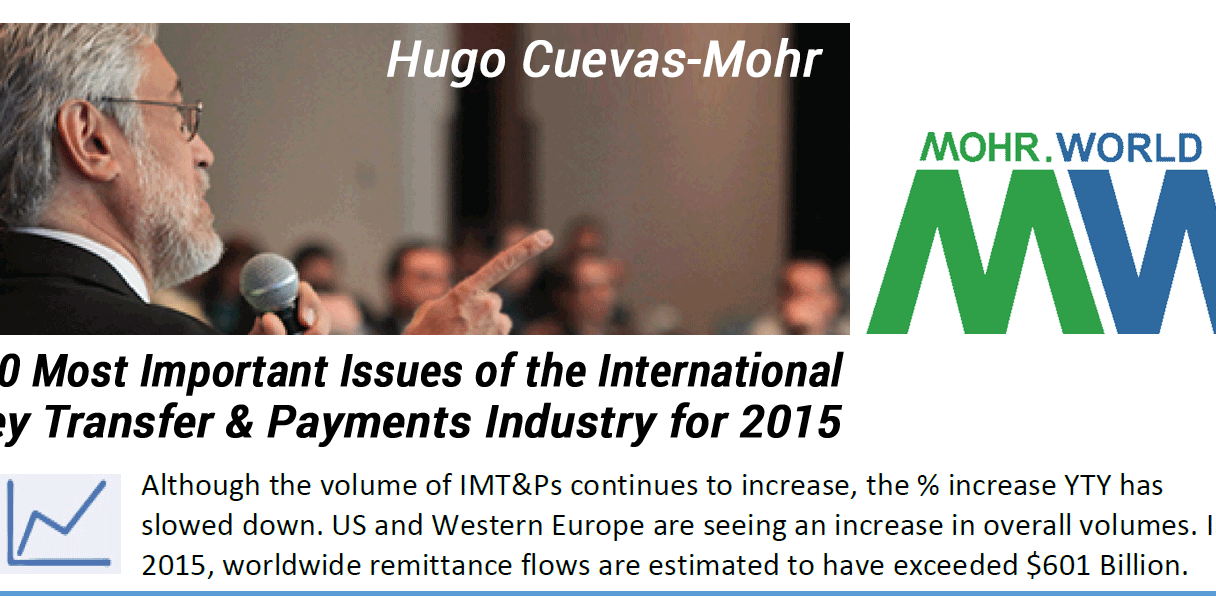 Both Latin America and Caribbean, as well as South Asia had increases of 5% or more. It must be noted – and discussed in Issue #3 – that the valuation effects of the U.S. dollar appreciation against the currencies of remittance-source countries, especially the ruble, influence the impact of this slower growth. The continuing recovery in the U.S. and a modest acceleration of economic activity in Western Europe are producing a general increase in overall volume.

Most U.S. money transmitters have had YTY growth between 5% and 15% in 2015 with a modest growth in their European operations. The mood in November at the IMTC WORLD 2015, in Miami, was upbeat, as many corridors showed a volume increase. Coupled with fairly stable prices and competition mostly based in the Forex spread, the traditional MTOs have been more optimistic in 2015 than in previous years.

For 2016-2018 it is estimated that Europe and Central Asia will see a large rebound if the Russian economy stabilizes. In 2015, worldwide remittance flows have been estimated to have exceeded $601 billion while developing countries received an estimated $435 billion, with East Asia, the Pacific, and South Asia each receiving around $130 billion, while LAT received close to 7$0 billion. The $453 billion is nearly three times the amount of official development assistance.

But, as we always state, the true size of the IMT&Ps market, including the unrecorded flows through formal and informal channels, is without a doubt, considerably larger. We also have to add that migrants have shifted a percentage of their money transfers to other value transfers, such as Bill Payments, which are not recorded as Remittances by Central Banks. Airtime (Top Ups) is another type of transfer that has increased sharply in the last few years all over the world, with an increasing number of migrants using the service to add funds to their families prepaid phones and an increasing number of MTOs are offering these services by partnering with Telcos. And last but not least is Parcel Delivery. As countries clean their customs procedures from long-time corruption practices and streamline their processes and international courier and cargo services drop in price, more and more migrants are sending parcels to their family members. In the case of Philippines the “balikbayan box” is an institution (read this article) and in the case of Colombia, is the way migrants give family members work (sending merchandise instead of money so the relative works by selling the merchandise sent, keeping profits and sending the principal back to continue the cycle).