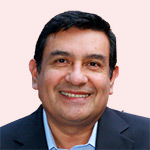 Raul is, since 2013, the Latin American CTO of Mozido, a mobile cloud-based commerce network based in Austin, Texas with various deployments around the globe. Since 2010, he has also managed Excelerius, Inc., a venture capital firm nurturing high tech companies in the mobile app space. Raul also serves as a director on the boards of Altamira, a credit union focused on mid-size companies; Miralta SA, a leasing company and Sportium, a fitness center chain located in the Mexico City area as well as member of the advisory board of Leap Factor, Inc., a high-tech startup in Silicon Valley. Previous to his role at Mozido, Raul was CIO of AXA Insurance in Mexico and Operations director at Seguros Monterrey New York Life. He holds a B.A. in chemical engineering, a business management diploma from Canadore College and attended the Kellogg Grad. School of Mgmt.