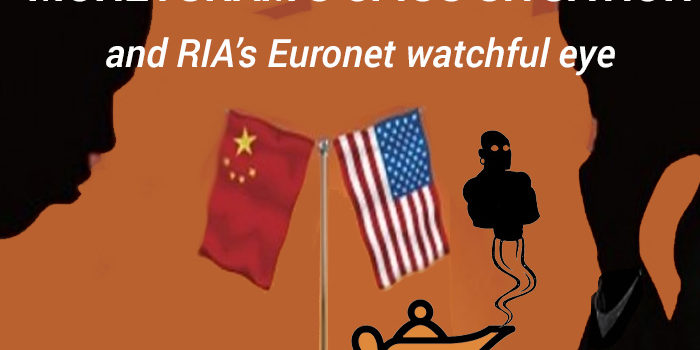 Let’s first remember. In April 15, 2017, Alibaba’s financial affiliate Ant Financial (Ant) agreed to purchase MoneyGram International, Inc. (MGI) for $18 per share. Ant, which is controlled by the famous Alibaba CEO Jack Ma, increased its price from $13.25 to $18 after RIA’s Euronet put in a bid for $15.20. In order for the deal to pass, the companies need approval from CFIUS.

What is CFIUS? The Committee on Foreign Investment in the United States. Is CFIUS under the watchful eyes of Mr. Trump? Are his America First policies at play here? Yes, definitively.

And we know in the industry, that US RIA’s Euronet is keeping a close eye on that decision. We all are. If the deal goes through every company in the industry will be more valuable… But let’s analyze the situation…

Before we jump to discuss the pending approval or denial of the MoneyGram acquisition by Ant Financial by the US government, it is important that our readers, especially readers from other countries than the US, understand what is CFIUS and how this government body deals with the intentions of foreign companies to buy or invest in American companies. Just remember that in April 15, 2017, Alibaba’s financial affiliate Ant Financial (Ant) agreed to purchase MoneyGram International, Inc. (MGI) for $18 per share. Ant, which is controlled by the famous Alibaba CEO Jack Ma, increased its price from $13.25 to $18 after RIA’s Euronet (EEFT) put in a bid for $15.20. In order for the deal to pass, the companies need approval from CFIUS. But everyone knows that a pressured CFIUS, under the watchful eyes of Mr. Trump and his America First policies poses real threat to the Ant-MGI deal. And we know in the industry, that US RIA’s Euronet is keeping a close eye on that decision.

THE COMMITTEE ON FOREIGN INVESTMENT (CFIUS)

The Committee on Foreign Investment in the United States (CFIUS – pronounced “sifius”) is an inter-agency committee of the US Government that reviews the “national security” implications of foreign investments in U.S. companies or in any other US operations. The Congressional Research Service published a few days ago, October 11, 2017 a detailed report [1] on CFIUS if you want to know much more about the committee. CFIUS published on September 20 a long-awaited report [2] to Congress on foreign investments in the United States. The annual report released focuses on 2015 with a table with summary data on 2016. The report shows an increase in the volume and the complexity of CFIUS reviews as well as the emergence of Chinese acquirers as the top investors before CFIUS. Also in the report shows “a relative consistency in the proportion of cases approved with and without security commitments known as mitigation agreements”. In an article by Baker & McKenzie the firm believes that “these trends are continuing in 2017 under the Trump administration, as CFIUS reviews are taking longer and entail broader questions about buyers’ and sellers’ businesses and prior transactions”. [3]

In 2016, CFIUS reviewed 172 notices, a 20% increase from the 143 notices in 2015 and a new record (exceeding the 155 notices of 2008, right before the recession). In the past few years there has been an increase in the percentage of notices withdrawn during the review process: 8% in 2014, 9% in 2015 and 16% in 2016. Notices are withdrawn and refiled, most of the time to give the parties and CFIUS more time to work the reviews and mitigation agreements, if any since the review process follows by law a rigid timeline. Others are withdrawn for other reason, commercial, procedural, or unrelated regulatory reasons. Of those that were withdrawn, a very small percentage were withdrawn for national security concerns. A typical CFIUS review will last 30 days with an additional 45-day investigation if security concerns are not resolved during the initial period.

The report that is available here http://bit.ly/2gqxR7F highlights the continuing importance of Chinese acquirers rising from 21 in 2013 to 24 in 2014 to 29 in 2015 while the next countries in the list remained fairly constant: Canada (22), United Kingdom (19), Japan (12), and France (8). Only Germany has almost dropped out of the list.

An article by Bledsoe Research Group (BRG) [1], a team of researchers focused on publicly listed equities, gives us a great analysis of the MoneyGram situation based on the latest CFIUS’ actions and Donald Trumps influence on the Committee. During the Trump presidency, CFIUS has become more aggressive in scrutinizing acquisitions and in 2017 they have blocked at least nine deals, a historically high number.

Just in July, CFIUS’s opposition to HNA Group’s $416 million investment in U.S. in-flight services firm Global Eagle Entertainment resulted in the cancellation of the deal with the Chinese company. A Reuters article said that “a source familiar with the matter said that the protection of customer data passed on through Global Eagle’s WiFi service was a major area of concern for CFIUS”.

On September 13, 2017, President Trump issued an Executive Order blocking the $1.3 billion acquisition by Canyon Bridge Capital Partners, a Chinese government-backed private equity fund of Lattice Semiconductor Corporation after CFIUS concluded that the transaction posed a risk to US national security [2]. This is Trump’s second blocked Chinese acquisition of a U.S. chipmaker within the last year and only the fourth time that a US President has ordered a transaction blocked or unwound because of national-security concerns.

The BRG article stresses the point that this action could be important for the MGI decision because of the concerns around customer data. Also members of CFIUS include Peter Navarro (White House National Trade Council) and Robert Lighthizer (United States Trade Representative) who have been extremely critical of China.

The BRG article also points to the fact that several members of Congress have raised questions about the ANT-MGI deal, including Robert Pittenger (D-NC) [3], Chris Smith (R-NJ) [4] and Senate Minority Leader Chuck Schumer (D-NY), as well as the Chinese government’s ownership stake in Ant. The exact percent owned by the Chinese government is not known, but this article describes Chinese state-controlled funds as top donors, while some has estimated the stake is around 15%.

BRG reports in its detailed article that it is believed that, since the merger agreement stated that the notice was due to be file by February 23, 2017, this is the date of the first submission. Media reports suggest the company pulled and refiled in mid-July, which might have been the second. A September news report states the company is preparing to resubmit the deal for review if they fail to receive approval during this latest round which should have ended in September.

WHAT WILL HAPPEN IF THE DEAL DOESN’T GO THROUGH?

The question is: Will RiA’s Euronet buy MGI? We understand that no one in MGI is very interested in the deal, most of our colleagues fearing of the loss of jobs. But that is besides the point as I told them. Euronet incurred $1.2 million in charges related to its initial unsuccessful bid for MGI, and those expenses were equal to roughly 3% of the operating income of the first 2017 quarter. In Euronet’s earnings conference call with analysts, CEO Mike Brown made one relevant comment regarding the failure to acquire MGI: “if you add up ourselves and MoneyGram and Western UnionThe Western Union Company is a US financial services company with headquarters in Englewood, Colorado with offices and agents all over the world offering services such as money transfers (P2P, P2B and B2B, money orders, and other business & commercial services. With close to 12,000 employees, more than 500,000 agent locations in over 200 countries and territories, Western Union is... want more?, the three of them control less than 25% of the world’s remittance. So, therefore, 75% is up for grabs and that’s what we’ve been focusing on; that’s how we’ve gotten stronger and stronger and bigger and bigger over the last year as we really focus on the rest of those people.” [1]

A second comment by Euronet’s chief might be seeing as a “walk away from the MGI deal” but I am not that convinced: “This is a big one; this would have taken all our powder and then some. And if it doesn’t go, then we’ve got a whole lot left as you suggest… we’ve actually been evaluating several other acquisitions alongside the MoneyGram one during this entire time. So we’re not really serial thinkers. You never know when the good one is going to pop up. So you’ve got to kind of run [a] parallel process [and] be looking at 2 or 3 all the time, all the time…”

I do feel that if CFIUS stops the Ant-MGI deal, Euronet will jump on it. But it is my own opinion with nothing to back it up. What do you think? Salvador Velazquez will be discussing this and other M&A movements in IMTC WORLD in the afternoon breakout sessions that he will be moderating. Come join us! We might have news by the end of November.

Meet Patrice Kiiru and His Outlook on African Remittances
outubro 17, 2017

Creativity in Times of Hibernation
outubro 17, 2017

RemitOne Continues to Tackle De-Risking: Interview with Aamer Abedi
outubro 17, 2017
Are you a PNET Member?