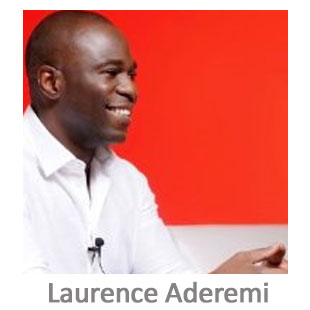 Laurence is the Co-founder and CEO at Moni. Previously, he was Google’s Head of Mobile Strategic Partnerships in Europe from 2010 to 2013. Laurence joined Google as part of the AdMob acquisition where he led strategy and business development for EMEA. Before AdMob he was European General Manager at Yahoo! after being Sr. Business Development Manager for Homestore.com. He worked for Morgan Stanley right after college.

Laurence eraned his BA with Honors in Law & Economics from the School of Oriental and African Studies at the University of London continuing on to the London School of Economics and Political Science majoring in International Development (1994).

Moni is a mobile money transfer platform that enables its users to transfer funds from their bank account directly into that of a recipient or to mobile wallets in a number of countries worldwide. Based in London, Moni was co-founded by Laurence Aderemi and Fernando Saturno. They were able to attract investors and launched in October 2014.