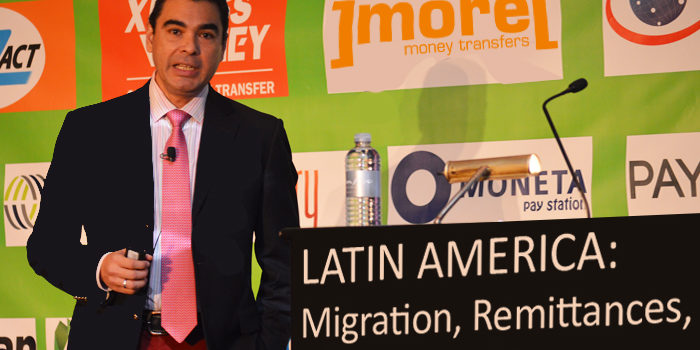 Both social and economic trends in Latin American and Caribbean countries are increasingly shaped by migration and its intersection with development and economic growth. Therefore, understanding future of migration and how its affect the region can offer cues as to the direction countries will take.

An outlook of migration in Latin America and the Caribbean in five years depends on assessing three main factors, namely, growth trends in the origin and destination of human mobility, including labor and others (children, or people escaping violence), determinants of such growth and possible consequences. Moreover, an outlook in transnational economic engagement requires looking at growth, the extent of payment modernization, marketplace competition and impact on growth and development.

For the next five years, we expect migration to continue, facing anti-immigrant sentiments. Similarly, we expect remittances to continue to flow through an increasingly modernized payment system.

Growth—The migration wave that is shaping the region is likely to continue its growing pattern for at least five more years. Specifically, migration from Haiti, Cuba, Central America, Venezuela, and Colombia show signs of continued mobility within the Americas, specifically towards countries like Brazil, Colombia, Cosa Rica, Dominican Republic, Ecuador, Panama, Peru, and the United States). It is likely that people from other nationalities, like Guyana, Paraguay, or Bolivia, will also show increases in emigration in the near future.

We estimate that Latin American and Caribbean migration will grow above 6% in the next five years. This figure represents more than double the demographic growth rate of the migrant host countries. The determinants of migration and the intention to migrate among people, as well as the transnational ties, are and will be strong factors of continued and growing migration.

Determinants—This growth is largely shaped by a continued deterioration of the state in fragile countries. In most cases this problem is associated to a chronic malperformance of governance and linked to systematic abuses of authority, social fragmentation, mushrooming of organized crime networks, and corruption. Moreover, these factors are accompanied to an economic worsening of all sources of potential growth. We observe a chronic deceleration of key indicators of economic growth such as agricultural and raw materials exports, tourism, or free trade zones.

In the case of Central America, migration will continue to be driven by three broad dynamics: victimization, transnational ties, and an inability to earn decent incomes. In the case of Haiti, migration is driven dramatically by state failure and transnational ties. Nicaragua and Venezuela are continuously pushing people out because of direct state threats to people, as well as due to economic crises.

Consequences—This mobility is creating a network of people connecting other people. For example, our work on Venezuelan migrants in four host countries showed than more than half of Venezuelans were planning to stay in those countries and not returning home. The same pattern was observed among Haitians and Nicaraguans. In turn, these transnational networks ensure a pattern of continuity in short term migration, at least during the subsequent three years.

As a critical mass of foreign-born people increases, one of the resulting realities is resistance among host societies to tolerate their visitors to the extent to externalize anti-immigrant, nativist sentiments, reducing visa entry, residency or temporary permanency permits.

As migrants arrive to countries like Panama, Ecuador, or Chile, which historically are not migrant host countries, the challenges of making inclusive public policies are shaping the political discourse. Moreover, border control across the Americas has turned into a major migration management issue. The critical issues under discussion are not likely to be addressed.

One of the controversial issues of 2019, the cutting of foreign assistance, will be partly resolved through its restoration with conditionality to reducing migration. Meanwhile Venezuelan, Haitian, and Nicaraguan migration will continue to grow with few responses from states. Some countries like the United States will offer a humanitarian approach but foreign labor integration will not be addressed through special programs.

Transnational economic engagement results from various activities through which migrants maintain links with their home countries, sending family remittances being the most known. Consuming nostalgic goods is another important activity.

The three critical issues particularly associated with remittances are growth in money flows, the modernization of the payments industry, and the economic impact of these flows. For the next five years, we foresee continued growth but at a slower pace than what has been observed for the 2015-2019 period. During this latter period remittances experience an annual 9% growth. For 2020-2025, the future of remittances will show a smaller but strong growth of around 7%.

The main factor explaining the continued growth relates to the increase in migration, but not exclusively. Migrants are also sending more frequently to their relatives. Their decreasing expectations of returning home have shaped their intention to remit, causing them to send higher amounts annually by remitting more frequently. In the case of the Northern Triangle countries, where the highest growth was observed, the “Trump fear factor” explains why remittances have increased despite restrictions on entry.

Remittances to Latin America and the Caribbean

Modernization of the Payments industry

While the demand for money transfers increases, the money transfe industry is adapting to changing demands offering online transfer services in the origination and destination. The growth of online payments is extraordinary. In some cases, such as the U.S. outbound transfers to Colombia, Guatemala, and Mexico, growth is above 30%.

The projection for other countries is that the market share for online services will increase to at least 20% of all sending money by 2020. In 2009 less than 1% of all United States transfers of remittances to the region were originated online, by 2022 the projection is that this figure will reach 30%. Collection of remittances in home countries via digital wallets, mobile banking or account deposits will also grow to 10% of all transfers. The impact of this modernization is quite substantive insofar as the payment’s ecosystem is reaching out the entire population in the region and providing greater financial access.

The extent of economic growth in the region will continue its same pace with limited levels of complexity, maintaining low diversification. For 17 countries in the Americas that represent one third of the region’s GDP, income dependence on few sources of growth (remittances, tourism, maquila, energy and mining and agricultural exports) will remain unchanged, limiting economic growth. However, the role of remittances will increase as other sources of growth may not improve due to global economic recessionary trends and competition. We expect a 1% increase of remittances in the share of GDP for these countries. Moreover, despite the impact, no policies are foreseen to capitalize on these flows.