THE GEOPOLITICS OF PAYMENTS, THE NO-DEAL FOR MONEYGRAM AND THE LOOMING TRADE WAR 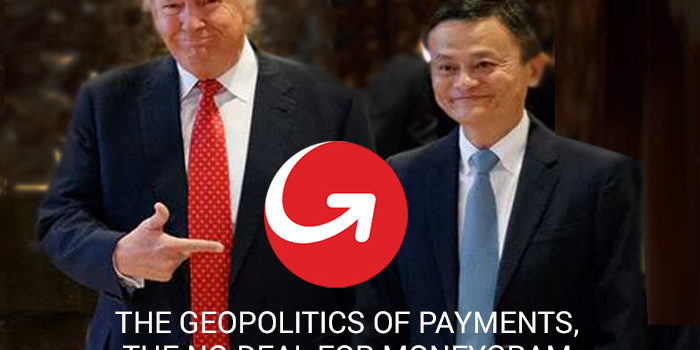 The news [1] January 2nd didn’t come as a surprise for the industry as President Trump has criticized China for its trade and currency policies and its “America First” slogan has been the damocle’s sword hanging over the deal. We analyzed the deal in a past blog explaining the US Committee on Foreign Investment (CFIUS) involvement in these kinds of deals. It is not the first time MoneyGram is not allowed to be bought. When Western Union was trying to buy it, the deal was stopped to prevent the creation of a monopoly.

In Ant Financial’s Jack Ma’s visit to Trump he promised on January 9th 2017, the creation of 1 million US jobs. It is worth reading the piece that the Guardian wrote [1] at that time when Ma dined with Ivanka and met with very influential people in Washington DC. But opposition to the MoneyGram offer was looming: “The MoneyGram deal has attracted significant opposition from lawmakers in Washington, hinging on the fact that a large number of military families use the company to transfer money.” We have to remember also that in the campaign trail, Trump promised to impose tariffs on Chinese goods [2] (although much of what the president says can be labeled as “fake news” this can really happen). Rising Chinese investment in the US and the world worries the White House, but is this the way to confront it?

It is surely very bad news for Moneygram and every one of its employees who had high hopes that Alipay, the world’s largest mobile and online payments platform, was going to save the company from the brink of failure. What will happen to the company? What is the future for MoneyGram? What is the future of Chinese investments in the US Financial Services sector? Fintechs in other parts of the world will surely welcome Ant Financial’s investment and the statement that Ant & MoneyGram’s are making plans to work together seems to be just a smokescreen to prevent MGI’s meltdown. Will Euronet’s RIA, who pushed to stop the deal, will follow through and buy MGI? If not, who else?

[1] Can Jack Ma, Asia’s richest man, create 1m jobs in the US? http://bit.ly/2mLXcsK
[2] Donald Trump ‘may be ready to press’ the punitive China tariff button http://bit.ly/2FJRIGw

THE NO-DEAL FOR MONEYGRAM

“What is more likely to happen at this point is that MoneyGram will sell to another company, and one company that has shown interest in the past is Euronet,” said Gil Luria, an equity analyst at D.A. Davidson & Co.[1]

Ant Financial agreed on a $18 per share all-cash deal. Euronet Worldwide (RIA Money Transfers) made an unsolicited offer for MoneyGram and openly lobbied U.S lawmakers, saying Ant’s proposal created a national security risk citing concerns about Ant Financial’s relationship with the Chinese government. As was discussed in a round table at IMTC WORLD 2018 in Miami, industry representatives never quite understood Euronet’s April 17 statement on MGI and its desired to “set the record straight”. As one round table participant stated: ”the statement sounds more political than a company that wants to really buy”.[2]

Euronet said in a statement: “While we continue to view a transaction with MoneyGram as logical, there is no guarantee any offer will be made or any transaction will ultimately occur”. Euronet might now find it challenging to pay even $10 a share because of MoneyGram’s deteriorating financial health [3].

While Ant Financials deal would have maintained all US Operations and would have probably expanded them, the future for MoneyGram’s US operation if Euronet acquires the company, is totally different.

Analyst Yakov Hofner updated his post on MoneyGram [4] – that anyone in the industry especially MGI employees should read, stating: “The irony gets even more striking when considering a key source of synergies proposed by Euronet: cost reductions [Expected Cost Synergies of Approximately $60 Million in the Second Year Post Close”]. The negative impact would have been squarely in the US where MoneyGram has most of its assets and resources”.

Industry consultant Faisal Khan in his famous piece [5] one year ago on the Ant-MoneyGram deal said: “a MoneyGram+Euronet merger just does not make much financial sense in the long run. Whilst Euronet has decent intentions, even they know that pulling it off will translate to making some tough choices and sacrifices.” And Faisal added: “Expect a lot of people to be laid off or made redundant with the [Euronet-MGI] merger. This merger brings unemployment.”

FYI, Ant Financial said it paid MoneyGram a $30 million termination fee for the deal’s collapse and both companies declared that “they will now explore and develop initiatives to work together in remittance and digital payments in China, India, the Philippines and other Asian markets, as well as in the United States.”

IF NOT EURONET, WHO WILL BUY MONEYGRAM?

I am going to quote Faisal: “Who could possibly be in contention for buying MoneyGram? I’ll tell you who it will certainly not be! It won’t be Western Union” and then went on to state: “It is hard to make an educated guess as to who it could be. But the two companies that come to my mind are Microsoft and PayPal. (My co-host from Around The Coin [1] — Brian Roemmele cited Amazon).”

One point that Faisal made in his article [2] is the fact that Ant Financial’s AliPay is already licensed in various US States as a money transmitter. If you check NMLS record [3] Alipay US, Inc. is licensed in more than 30 states. Will Alypay keep on getting licenses and decides to acquire medium-sized companies and decides to compete in the US market? We will see. We do have a good set of companies that AliPay will surely find interesting!

THE MGI DEAL: ONE STEP IN THE US-CHINA LOOMING TRADE WAR?

Trump made China’s trade surplus with the US a key issue in his election campaign and the trade imbalance has continued to grow all through 2017. The surplus was reaching close to US$350 billion and if it went over, it would surpass the 2016 imbalance. Daniel Russel, former assistant secretary of state for East Asian and Pacific affairs, said political pressure might force Trump to act soon: “There’s a group of people supporting Trump that are real hawks when it comes to taking action, and the administration has been signaling its intent to take action”[1]

China is not pleased at all although the comments by officials have been restrained. Official news agency Xinhua described the fading friendliness between the two countries, with the US “stuck in a zero-sum mentality”. “China and the United States are about to ride a bumpy journey in trade in 2018 if the U.S. government goes its own way, and retaliatory measures by China could be on the table,” it said.[2]

In the US there is likely to be expansion of jurisdiction for CFIUS, especially in acquisitions concerns over  data protection and investment in emerging technologies,  areas such as robotics and artificial intelligence that often have a military application — unmanned aircraft for example. Now, the narrow definition of national security that CFIUS had has been broadened realm that  includes “economic security” and that changes the game.

There is also a geopolitical control game being played out. Remember that the US Treasury Department uses the global dominance of companies like Visa, Mastercard, and even the SWIFT interbank payments system to exert pressure on other countries in the service of U.S. foreign policy goals and trade sanctions.[3]

The retaliation in China will surely come in the form of tightened data and security laws for American firms doing business in China. The country is a challenging environment for U.S. tech giants, with Microsoft forced to pull its Skype phone call services, and Apple removing virtual private network apps from its China iOS store to comply with local censorship.

“I wouldn’t be surprised if in 2018 there is some tic-for-tac between the two countries,” Eurasia Group’s Triolo said, adding that data and security laws could certainly be used to “complicate the aspect of U.S. companies doing business there.”[4]

WHERE WILL CHINESE INVESTMENT IN FINTECH & FINANCIAL SERVICES GO? THE GEOPOLITICS OF PAYMENTS

China is in the midst of a fintech revolution as well as other countries around the globe and the US is lagging behind. Outdated regulation, derisking, digital adoption, are the main reasons. The Fintech revolution will determine how the world spends money in years to come and China is leading the pack. The WeChat versus AliPay battle has been labeled as epic. China’s leading social network, WeChat (“China’s Facebook”) and China’s dominant online marketplace Alibaba (“China’s Amazon”) have been squaring off in China and now the rivalry has moved to the global space, in order for the companies to seize as much online payments territory as they can as quickly as possible.

AliPay and WeChat together processed over $3 trillion or perhaps as much as $5 trillion of electronic payments in 2016 (no one outside China knows for sure).[1] These figures are roughly equal to China’s total retail sales and about a third of China’s GDP. They dwarf U.S. rivals like PayPal and Apple Pay, and the rest of the world lags even farther behind.

The unmatched acquisition and consolidation of AliPay will be probably accentuated after the failed deal. Alibaba has spent between $30 and $40 billion on over 100 investments and acquisitions since 2010 [2] even if some deals the financial terms were not disclosed.

“The investment climate in the U.S. is definitely getting more hostile,” said Ken Xu, a partner at Shanghai-based investment firm Gobi Partners, who recently invested in U.K.-based augmented reality firm Wave Optics. “Speaking of things like AI and computer vision, startups in Canada, Israel and Europe have good R&D capabilities as well.”[3]