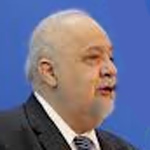 Emilio Garofalo Filho is one of the leading economists in Brazil. Graduated from the Catholic University of Sao Paulo (1976), he has been Vice President of Banco do Brasil, a member of the Board of Directors of Banco Latinoamericano de Exportaciones (BLADEX), a member of the Governing Body of the State Bank of San Pablo, Special Adviser to the Ministerio da Fazenda, among other positions. He was the Director of the Câmara de Comércio Exterior (Camex) in Brasilia until very recently. He has been a consultant on Foreign Exchange Issues for several national and international companies. He teaches at the University of San Pablo and various institutes in Foreign Trade, Capital Markets and Foreign Exchange. He is the author of a large number of books and publications, such as “Câmbio, Ouro e Dívida Externa” and “Câmbios: Princípios Básicos do Mercado Cambial”.