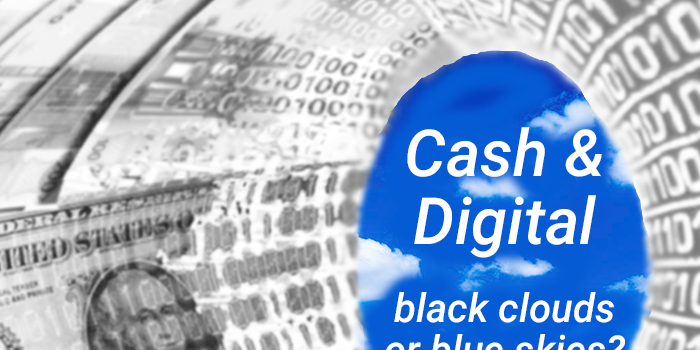 Last week at the ESTA Conference, the European Cash Management Companies Association’s yearly event, this time in Vienna, I moderated a panel entitled “The war on cash: black clouds or blue sky ahead?”. For the panel, I had the opportunity to have some of the best speakers on the subject, Fabio Andreotti, Professor Dr. Gerald Mann, Jesse Hicks, Mehul Desai, and George Harrap.  Read this article on the panel and the conference to understand the side of the story that you never hear.

The panel had the following topics[1]:

Following a short Q&A and the Coffee Break we went into the last two panelists:

[1] All the panel presentations are in one pdf that you can download here: http://bit.ly/2K4lw5h – In case you need other presentations from the conference, please contact ESTA at https://www.esta-cash.eu/contact/

Yes, the war on cash, again…

The war on cash is a dozen – or more, headed monster. It is waged primarily by banks who have long decided that they do not want to handle cash anymore, not only because is costly and messy but because they can’t make any money out of it. Secondly, card companies that understand that, instead of competing against each other, they need to compete with cash payments; the more card payments the more revenue. Easy math. Their most important initiative is the “Better than Cash Alliance”. You can throw into the picture the Mobile Money Companies, either Mobile Communication providers or the App developers who want to give you the convenience of mobile payments, wallets, etc.  Just from this sample, you understand that they are all fighting to replace cash, this “obsolete” and egalitarian method where none of them can make money with.

The public perception, which they have helped shape, is that cash is soon disappearing and we as a society, as individuals and as business-people, we will be all better without it. Some of the fallacies have been well argued against by an initiative called Cash Matters, like is the idea that less cash means less crime or that traces of cocaine in all cash proves that this is the main method used by smugglers or that cash is dirty and the amount of bacteria in each bill proves this.

Is cash in a losing battle? Who is defending its use? One of these defenders is the cash management companies, the Non-Bank Financial Institutions, who, through logistics and technology, have proven that cash can be handled efficiently and economically if they are given the regulatory measures to accomplish their vision. It is indeed happening. Other defenders are retail chains and cash dependent industries, especially the ones that cater to the most vulnerable members of society, whose clients prefer to use cash. Even if some retailers want to pass the cost of cards to consumers, there are laws that prohibit this practice. Money Transfer Companies and other NBFIs have been for a long time victims of the war on cash with banks’ derisking practices.

Governments have other reasons to also desire to get rid of cash and the panelists identified these reasons, among others:

For me, a non-economist with a simplistic view of finances, the idea that in a cashless world, there would be no lower bound on interest rates and that is what central banks are pursuing was surprising. Take this quote from the IMF Blog: “A central bank could reduce the policy rate from, say, 2 percent to minus 4 percent to counter a severe recession. The interest rate cut would transmit to bank deposits, loans, and bonds. Without cash, depositors would have to pay the negative interest rate to keep their money with the bank, making consumption and investment more attractive. This would jolt lending, boost demand, and stimulate the economy. When cash is available, however, cutting rates significantly into negative territory becomes impossible.[1]” I must thank my panelist, Prof. Mann, to explaining this to me and the participants at ESTA.

The last two panelists discussed Cash & Digital. Mehul Desai showed us how a group like Finalbr who is equally in the world of cash & digital, manages both, with an increasing use of technology, to serve the needs of clients in the 140 countries where they are present. George

Harrap, on the other hand, showed the increasing interrelationship of virtual currencies and cash, mostly by the uneasiness of central banks, commercial banks and card companies on the management of virtual currencies. Besides the services that his company Bitspark offers for cross-border settlements using virtual assets, George Harrap showed the growth of Bitcoin ATMs in the world and how this sector is maturing with 2nd generation technologies better equipped with KYC, AML and CTF processes.

Discussing the recent case in Spain of Bitcoin ATMs used for Money Laundering with compliance professional Lourdes Soto in Madrid, she commented: “There is a lot of work for compliance professionals in the fintech sector, since criminals are always poking around trying to test every system in existence to use it for their illicit purposes. Learning from mistakes is crucial”.

Jesus Izquierdo, Compliance Officer for Bitstop, one of the most advanced Bitcoin ATMs in the market, remarked: “Banks & Non-Banks, from fintechs, to prepaid card issuers, money transfer companies, etc. have always learned from the oversights of others in the field, strengthening systems in the process, always looking to become more compliant and resilient”.

In a seven-speaker panel moderated by Andrea Nitsche, Director of Communication of G+D Currency Technology GmbH, the Cash Matters initiative and Global Cash Alliance Committee Chair of the International Currency Association, the Swedish case was extensively discussed. If you don’t know what is happening in Sweden, the short story is that banks essentially decided, in their war on cash, to strongly influence its usage, having a resounding success. This change in reducing the availability of cash to the population has gone to such a point that the government has had to intervene, pressured by many community-based organizations, to call for an all-party commission to analyze and discuss laws and regulations to force banks to make cash available. Mr. Ragnar Olofsson, Secretary at the Parliamentary Committee of Inquiry on Cash of the Swedish Riksbank and author of the report “Securing the public’s access to cash services in a rapidly transforming payment market – the case of Sweden” explained the new measures[2].

Of course, the discussions on whether banks are reacting to consumer desires or banks are driving the change, is quite interesting. I don’t think we have to discuss what was first, the chicken or the egg. Mr. Peter Wesenberg, Head of Cash Handling and Security Systems of the Nokas Group in his presentation “Has the point of no return been reached in Sweden?”, left very clear advice to the financial world: Do not let banks decide the future of cash.

We know that cash is not going away anytime soon. Maybe it will be replaced by digital cash; hard to predict. Some Central Banks are even considering, with many doubts, the issuance of national digital currencies[3]. Regulators and Central Banks are having to think twice when they say: “We are neutral in the usage of cash” like Governor Dr. Ewald Nowotny of the Central bank of the Republic of Austria said in his inaugural speech at ESTA in Vienna.

Endnotes:
[1] In the last day at ESTA we heard the panels “Cash and the Media”, “Cyberisk and Cybersecurity” and “Attack and Loss Report”.
[2] Another interesting article on the Swedish case is “Money and payments – where are we heading?” on June 2018 by Stefan Ingves, Governor of Sveriges Riksbank, the central bank of Sweden, at the Stockholm School of Economics – http://bit.ly/2JERWUB
[3] http://bit.ly/2HGZapb Casting Light on Central Bank Digital Currencies by Tommaso Mancini Griffoli ; Maria Soledad Martinez Peria ; Itai Agur ; Anil Ari ; John Kiff ; Adina Popescu ; Celine Rochon – November, 2018