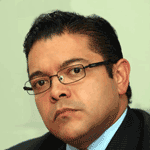 Arnulfo is the Director of IME – Instituto de los Mexicanos en el Exterior part of the Secretaría de Relaciones Exteriores after being the Coordinator of Mexican Communities Abroad of the Presidential Campaign of now President Enrique Peña Nieto. In the public sector, he has served as Coordinator of International Affairs and Economic Advisor for the State of Mexico and Advisor to the Secretary of Economic Development. He is also the Founder and CEO of Grupo Draconis, a business development firm in information technology, new energies and political consulting. He received his BA in Int’l Trade from the Instituto Tecnológico y de Estudios Superiores de Monterrey (ITESM), Master in Dev. Studies & PhD in Political Economy from Cambridge Univ. He also has a Post Doctorate in Latin American Integration from Tulane Univ. and a Post-Doctorate in European Economic Integration from the European Univ. Institute in Florence, Italy. He has lectured at national and international conferences in Brazil, United States, England, Ireland and Italy and is fluent in Spanish, English, Italian and French.