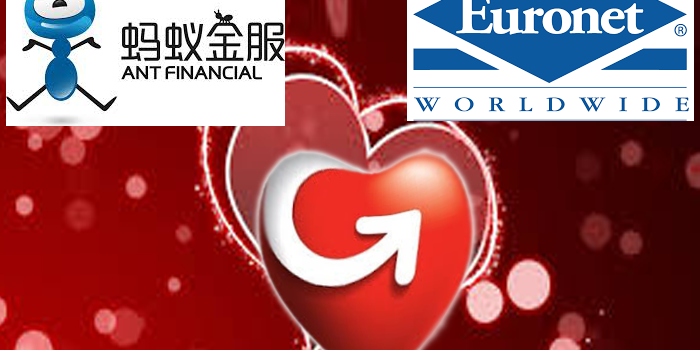 MoneyGram and Ant Financial Services Group announced on April 17 that the companies have entered into an Amended Merger Agreement under which MoneyGram will merge with Ant Financial. Ant increased the offer price from $13.25 per share to $18.00 per share in cash (The transaction is valued at approx. $1,204 million). The operation will be completed in the Fall of 2017. It has gained antitrust clearance from the US government and the filing of state licensing approvals has begun. MGI will operate as an independent subsidiary of Ant Financial and retain its brand, management team, IT infrastructure and headquarters in Dallas. (http://bit.ly/newMGI-Ant)

I am going to assume that you are an industry colleague that needs much more information about the sale of our industry’s number two international money transfer company., MoneyGram. I decided to review all the news and give you an in-depth view of the information we have on the two suitors that have expressed their interest in MGI, Hangzhou, China-based Ant Financial and Leawood, Kansas US-based Euronet Worldwide.

We know much more MGI & Euronet (and more specifically its subsidiary RIA Money Transfer) since they have been present in our conferences, as participants, speakers and sponsors, but we are yet to meet our colleagues from Ant & Alibaba at an IMTC and we are extending our cordial invitation.

First let’s see who is Ant Financial, an affiliate company of China’s Alibaba and China’s most valuable financial technology company accounting for half of China’s non-bank online payment market with HQs in Hangzhou. Ant Financial is probably going public in a year or two. We have to remember that Alibaba held a record US IPO that was worth 25 Billion in 2014 and its CEO Jack Ma is a business celebrity. Just in 2016, Ant raised a $4.5 billion funding round at a valuation of $60 billion. Investors included China Investment Corp (CICCurrency in circulation (CIC) is normally used in reference to "currency in hand" physical currency in circulation used to buy goods and services. In the case of the US, there is more than $1.5 trillion physical USD in circulation at any given time while approximately 1.08 trillion euros are in circulation. Both numbers have increased over the years due to... want more?), a subsidiary of China Construction Bank, China Life, China Post Group, China Development Bank Capital and Primavera Capital Group. Ant owns Paytm in India, Thailand’s Ascend Money, Kakao Pay in Korea, and in China, Ant’s Alipay, who has 450 million users and Zhima Credit credit rating system.

On the other hand is Euronet Worldwide, Inc. (EEFT), a US provider of electronic payment services founded in 1994 by present CEO Michael J. Brown, with HQs in Leawood, Kansas that reported a profit of 1.959 billion USD in 2016. In 2015, the company processed approximately $74 billion in ATM, prepaid and money transfer payments for approximately 200 financial institutions, 200 mobile operators, with around 317,000 agent locations. Its stock has gone from around $20 per share in 2012 to more than $80 in 2017. Euronet’s subsidiaries include RIA Money Transfer, low-cost online payment solutions Epay, Foreign Exchange Firm HiFix and online foreign exchange tools and services company XE. The company reports close to 60,000 employees in more than 55 countries. RIA powers Walmart-2-Walmart domestic money transfer service while MoneyGram powers Walmart’s international money transfer service. Worth noting that 10 years ago Euronet tried to purchase MoneyGram.

Ant’s offer in January was $13.25 per share or approximately 880 Million USD. Euronet’s offer a few days ago was $15.20 per share, around 1 Billion USD. Euronet’s offer for MGI ten years ago, when it failed to acquire the company, was $1.65 billion, or $20 per share. It was also mentioned in the news that Euronet had also offered to assume about $940 million of MoneyGram’s outstanding debt.

We should assume that Ant Financial will probably come back with a better offer since in a very recent statement that it is committed to continue its buyout process with MGI.

Future of MGI under Ant or Euronet

Besides the question of pricing & valuation, the future of MoneyGram in the hands of Ant or Euronet seems to be very different, at least in the short and medium terms. We can only speculate at this time and that is why this is a subject that we are considering for a panel at our coming IMTC EMEA 2017 conference in Madrid on April 4th to 6th, where we like to discuss the M&A activity in the money transfer & remittances industry and its impact on the future of the sector.

If Euronet is the successful bidder, it will probably leverage the success of its subsidiary RIA Money Transfer who is the #3 or #4 international money transfer company. Will Euronet use the synergies between the RIA & MGI and empower both brands? Adding MGI’s 357,000 agents to Euronet’s 317,000, would it be able to compete head to head with Western Union’s 500,000 agents? Will this result in agent as well as job duplicities that might result in agents & jobs being lost? Will Western Union’s dominance falter?

If Ant is successful would it let MGI continue its present course while investing in its technology and digital channel transformation? Will Ant target other US companies too? In the present “America First” environment, will Ant’s purchase get clearance by the CFIUS (the US Committee on Foreign Investment, an inter-agency panel that reviews foreign acquisitions of domestic assets for national security concerns)?

It was reported that 20 US organizations sent a letter on March 10 to U.S. Treasury Secretary Steven Mnuchin and other officials that warned against allowing China’s Ant Financial to buy Moneygram with arguments that if China is allowed to dominate the global payments market, it will use the information, technology, intelligence and economic power to the detriment of the US economic and national security.

Will these mainly conservative organizations (Richard Viguerie’s ConservativeHQ, Tea Party Nation, the National Black Chamber of Commerce, etc.) derail Ant’s intentions? Will this create a China-US controversy? For sure these letter-signers will be much more agreeable to Euronet’s offer.

What are they buying?

And last but not least: What are they buying? MoneyGram International Inc. is the world’s #2 international money transfer company with HQs in Dallas, Texas, an operation center in St. Louis Park, Minnesota and a number of regional and local offices around the world. MGI Has a presence in more than 200 countries with around 350,000 physical locations and revenues in 2015 of $1.4 billion, only 13% from digital transactions.

MoneyGram’s shares have risen more than 25% to $15.77, signifying that its shareholders may be anticipating a superior bid from Ant.

Meet Patrice Kiiru and His Outlook on African Remittances
March 15, 2017

Creativity in Times of Hibernation
March 15, 2017

RemitOne Continues to Tackle De-Risking: Interview with Aamer Abedi
March 15, 2017
Are you a PNET Member?