Estimating the Volume of the Industry

You are here:
ArtículosIMTCNews & Comments 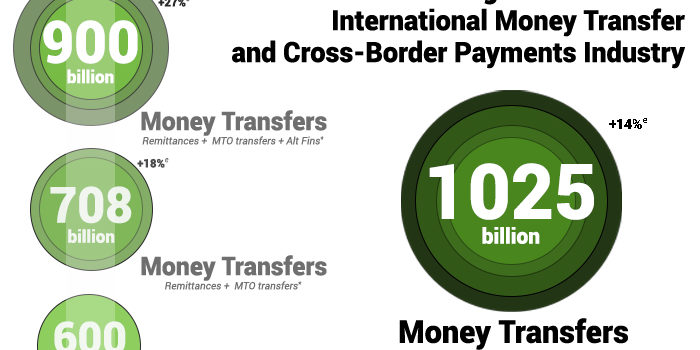 For IMTC WORLD in Miami this past November, I decided to present my estimates on the size of the international Money Transfer and X-Border Payments industry, coming to a figure of approximately 1,025 billion USD, based on private communications with industry players and my own analysis (INFOGRAPHIC). The estimate starts from the 600B estimated by the World Bank on Remittance Volumes and adds estimates on unreported remittances, x-border money transfers that don’t fall in the strict “remittance” category (see definition below) and B2B & B2C transfers handled by the industry, by companies using Hawala-Type Methods and newcomers using VCs . If you want some detail about how this estimate was calculated, please read below or download this PDF to read.

Estimating the size of the remittance market has been a pursuit of many multilateral agencies such as the Interamerican Development Bank (for volumes to Latin America), CEMLA (Centro de Estudios Latinoamericanos), The Interamerican Dialogue, Eurostat (volumes in and out of Europe) and the World Bank, working with data collected from Central Banks, some from reports requested to the industry and some from estimations on Balance of Payments data.

For many years I have presented the World Bank estimates as the only estimates that were reliable enough to show as industry figures. But after the financial crisis and the increase in digital payments, fintechs coming into the picture and industry players diversifying their services & products, it became evident that remittance volumes and international money transfers & payments volumes were distancing themselves. Although worldwide remittances have been growing in the last decade (see chart), volumes of industry players were increasing much more. And the closing of smaller players by compliance costs and derisking could not account for the increase.

In several meetings in the past two years I came to the conclusion that we needed a better estimate. But I never thought it was going to be so difficult. And it will get harder as Bitcoin and other VCs increase their transactional volume as international transfers, either used as P2P, B2P, P2B or B2B. Let’s first go into the glossary of terms being used so we have a better understanding of what we are talking about.

[1] The Migration and Development Brief 28 – October 2017 The World Bank Group – Knomad http://bit.ly/2kFTjnb publishes an Appendix (pags. 33-35) with an analysis of the collection and estimation of remittance flows.

[3] From GAO’s Report: “GAO recommends that BEA conduct analyses to improve the reliability of its estimate and follow established policies for documenting its methods and analyses. BEA agreed to implement the recommendations but disagreed that its estimates are unreliable and not adequately documented. GAO disagrees and maintains that BEA’s revised estimation model produces unreliable estimates and BEA could not provide adequate documentation of its methodology. http://bit.ly/2zjBKSw

[6] Juniper Research in a brief of its Mobile Remittances Study forecasts that the total number of mobile international airtime top up transactions will approach half a billion for the first time in 2018. http://bit.ly/2BpTN8K

[8] For more information on Hawala Systems read the classic US DOT & Interpol paper by Jost & Singh “The Hawala Alternative Remittance System and its Role in Money Laundering” http://bit.ly/2CQmhZO

These business models presented below are just a few that are being increasingly used by firms in the industry and are, in a way, modern hawala services, looking to avoid international wire transfers:

1) Bitcoin Remittances: A money transfer agent in Seoul receives Korean Dollars from senders, buys bitcoin locally, transfers the bitcoins to a company in Manila who resells them locally for Filipino Pesos who in turn distributes the funds locally through mobile wallets or cash out stores. These unrecorded remittances are happening at an increase pace throughout the world. Read this article by Atanu Biswas & Bimal Roy [1] and this one from Storifier [2]

2) People-People Matching: A digital service in the US let’s you place a buy or sell for funds in a certain country based on funds in the US. The service uses an escrow-type of service to secure the transaction in one or each of the ends and funds are never transferred internationally. Local Bitcoins, an internet service, matches people buying & selling VCs and the exchange of funds is done, locally or internationally.

3) People-Business Matching: Many small businesses, having economic activities in two countries match the flow of funds from needs of outflows & inflows at either end without the need to send international wires. Doleiro services using large amounts of cash in reais in Brazil, for example, have always found ways of using this cheap cash to pay international transfers, either remittances or business expenses. [3]

4) Need-based Matching: A person sells its home in Caracas and needs the funds in USD. A person/business receives the funds and pays out remittances until the funds are used in its entirety in Venezuela and the recipient in the US collects those funds. These service is used in many countries were controls exist of exchange differential through formal methods are large.

5) Netting by MTOs: DeriskingThe closing (or not opening) of bank accounts by financial institutions as a way to avoid the risk associated with providing banking services to a law-abiding sector of the economy. Derisking has been used as an excuse to stifle competition and for political and/or economic reasons.... want more?, the cost of international wires by banks, the increase in banking costs, restriction by banks on MSB Banking and restriction on international wires have led to an increase in services by aggregators, by foreign exchange firms settling domestically or finding ways to settle funds through third parties by “triangulation”. Triangulation means in this context the netting between three parties (or more) instead of two.

Step 1: Remittances: We begin by using the estimates of the World Bank Group & Knomad who projected the worldwide volume of remittances for 2017 to reach 596 Billion

Step 2: I have estimated that on top of Remittances, an 18% should be added from unreported or underestimated remittances, the volume of Airtime (top-ups) and Bill Payments as well as small investments, sent by migrants through industry channels and that are not accounted for as they do not constitute remittances for certain central banks. This gives a total of 708 Billion USD

Step 3: I have estimated that on top of the 708B, a 27% should be added from the volume of international money transfers done using VCs, both for personal as well as business related transfers, netting by MTOs and traditional Hawala and modern Hawala services. Here we add the flow of international money transfers that are trade-related and that use the same existing remittance rails. This adds a total of 192 Billion USD for a total of 900 Billion. Some of my colleagues feel that I have underestimated the volume of Hawala transfers and they might be right. I just hope that better estimates come forward approving or disapproving my estimates and moving this conversation forward. It will be extremely beneficial if these estimates are done in a country by country basis, with the knowledge of local markets by local or regional experts.

Step 4: Last but not least, I have estimated that on top of the 900B we need to add 14% for the B2B international money transfers that the industry is now increasingly managing, either by offering these services parallel to their remittance services, opening new companies serving business transfers as well as the new fintechs that are managing B2B both as regular FOREX services traditional do or by using VCs.

Flows moving from Banks to MTOs?

Although Banks play a large role in the remittance industry mostly in the inflow or the payment of remittance orders (account deposits either received directly or through MTOs as well as cash pick up in branches or banking agents) they are dominant in non-remittance international transfers, especially in large volume transactions, as shown in the article entitled “Banks and Money Transfer: Sleeping Giants?” by industry analyst Yakov Kofner. Yakov states: “So the banks […] are among the market leaders without even trying. How could that be? First, they are not serving exactly the same consumer segments as specialized remittance providers, and, second, they are doing just enough to keep customers from leaving.” [1] US large Bank clients send transactions averaging 8-10K while for traditional MTO clients the average is $200-$400 and 1-2K for digital MTOs while higher-end Forex firms average is 5-6K

It is a fact that online money transfer operators, who have been increasing the volume of international money transfers at a vast pace, believe that the users of their services come, to a large extent, from the banking sector. How many customers are moving from the brick & mortar space into the digital space and are using digital MTOs is a question that was debated in the past IMTC WORLD with very interesting points of view presented by the panelists. Unless some of these bank transfers in the different countries are counted in the remittance data, these volumes are not part of my estimates.

Regardless of the exact proportion of new clients (strictly new or moving from the banking sector) vs. old clients adopting a new channel, the volume handled by MTOS worldwide is increasing due to digital offerings. International Gift Cards being offered by industry participants, for example, will undoubtedly increase the overall volume as more people will feel inclined to send these gifts. The US domestic gift card industry has increased

It is important to mention that ease of use of x-border transfers increases volumes (or makes those transfers more formal in nature) as it has been exemplified in Africa where x-border mobile wallet services will undoubtedly increase the flow of funds for all types of uses, remittance or not in nature.

Meet Patrice Kiiru and His Outlook on African Remittances
December 19, 2017

Creativity in Times of Hibernation
December 19, 2017

RemitOne Continues to Tackle De-Risking: Interview with Aamer Abedi
December 19, 2017
Are you a PNET Member?