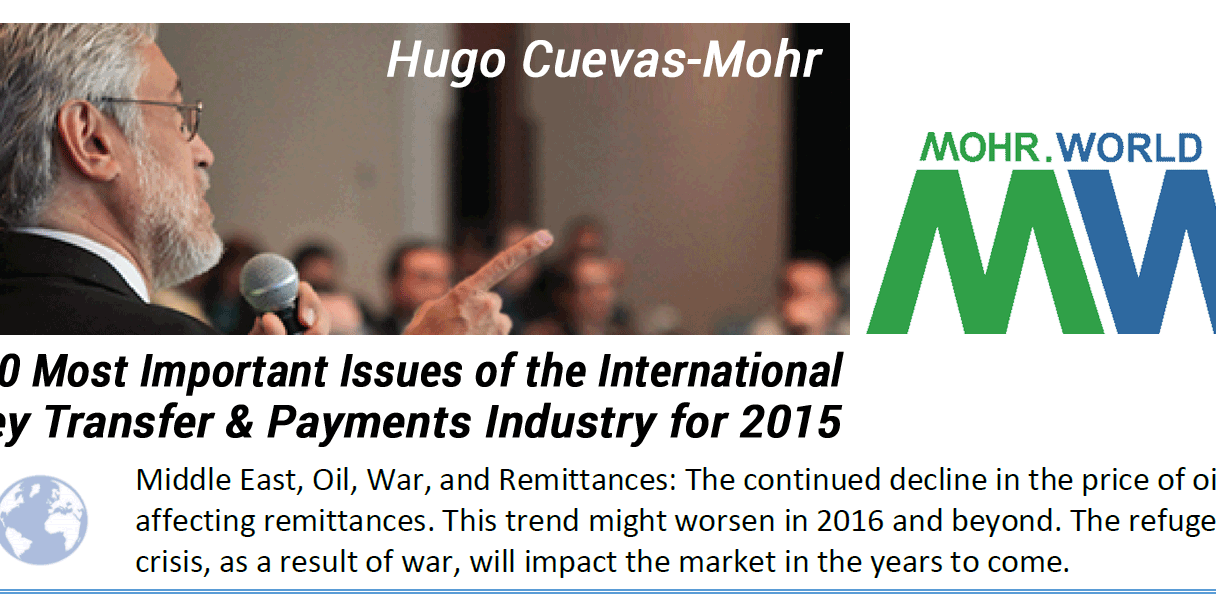 The trend might worsen if fiscal spending and construction slow down as the effects of low oil prices continue. Up to now, GCC countries have used their fiscal buffers to maintain spending.

Russia’s remittances that have been closely linked to the price of oil, have plummeted. The Kyrgyz Republic, Uzbekistan, Tajikistan, and Armenia –  countries that are heavily dependent on Russian remittances  – are feeling the effects, worsened by the weakening of the ruble. As reported by The Economist, money sent home from Russia by Tajik migrants was down by 44% in the first six months of 2015. Remittances from Russia to Uzbekistan fell by half, and those to Kyrgyzstan fell by a third. Iran entering the oil market will surely hurt the other GCC countries economies, and 2016 will offer us the first glimpse of this new world.

How remittances will evolve in the Middle East as a result of the refugee crisis is hard to predict. From anecdotal evidence we know that remittances have helped migrants in their “going north” journey, and reports have been published on remittance flows to the refugee camps (Roger Dean); but, how the displaced Middle Eastern migrants will find work in Europe and North America and participate in the reconstruction of their towns and villages back home is uncertain. The war destruction won’t leave much family to help and too little motives to make the journey back to rebuild. Whatever the future brings to the region, the IMT&P industry will be there to serve the needs of the migrants and their families.

I want to make a note on the importance of Roger Dean’s report on Syrian remittances and the elaborated network of informal money transfer systems that are used in the conflict, specially the Hawala system. Dean describes says in the report: “In areas of government control, registered hawalas are being effectively used for Cash Transfer Programming (CTP), however the regulatory environment means that confidentiality requirements have to be carefully considered. In the large parts of Syria outside of government control, where major humanitarian needs persist, unregistered hawalas are being used to cover pay NGOs’ operational costs and pay their suppliers, and represent the only potentially (and partially) scalable cash-out facility. The complexity of, and therefore the full range of risks and opportunities associated with, the hawala system remains only partly understood by many INGOs at an organisational level, although considerable familiarity may exist among key members of national staff and local partner NGOs.” Philippe Breul in his report on the coordinated efforts to improve remittances to the close to 1 M Syrian refugees in Jordan describes the formal remittances services available and their shortcomings. The refugee crisis has also inspired a whole debate on the importance of remittances, of not separating refugees from economic migrants and how solutions should start with the facilitation of remittance flows. This blog post by Georgia Cole from the Independent is quite explicit in this subject: “Evidence abounds about the importance of remittances and the value of facilitating these global flows of money. The celebration of remittance economies nonetheless seems to have remained detached in the popular media from the broader debates on migration and asylum. Remittances are not only quantitatively greater, but also qualitatively more effective at assisting local populations and catalysing their development.”