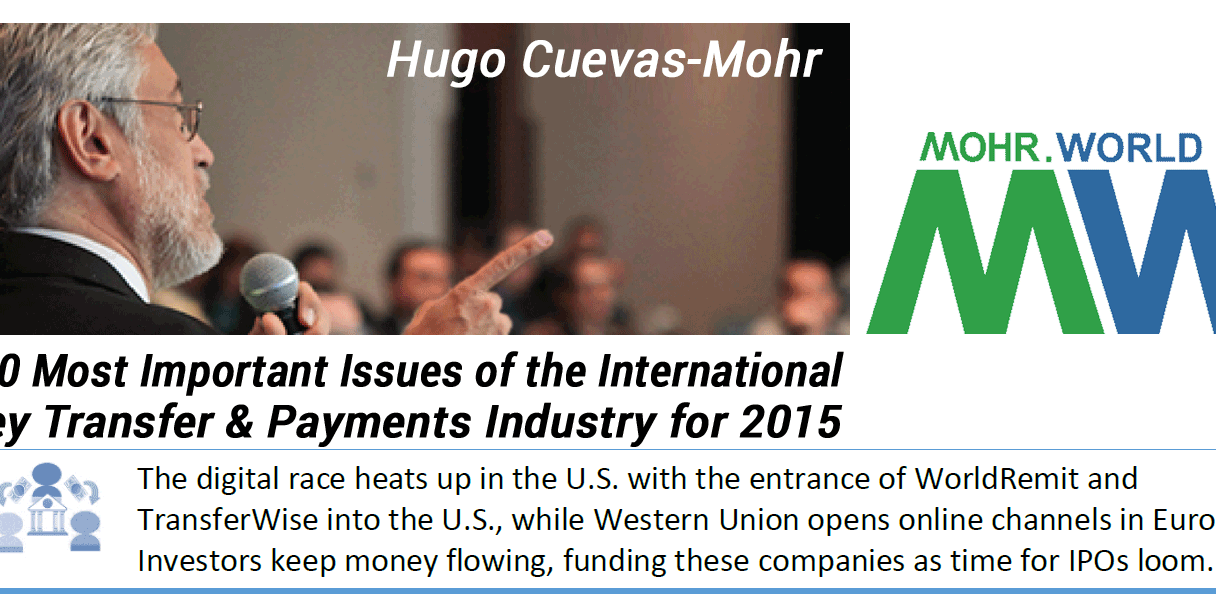 The digital race heats up in the U.S. with the entrance of World Remit and TransferWise into the U.S. market, while Western Union opens up online channels in Europe. SaveOnSend articles, written by Alexey Artamonov and his multinational team, are probably one of the best sources to explore the rise of TransferWise and its initial strategy in Europe.
– competing with banks for “non-remittance” cross-border money transfers which are sent by white-collar expats, retirees, or students, “rather than by blue-collar migrants. Therefore, TransferWise’s average sent amount is $2,300 per transfer which is two to three times more than an average amount sent by remittance startups like WorldRemit, Azimo, or Remitly.” Investors keep money flowing, funding these companies as time for IPOs loom.

SaveonSend writes in a very descriptive story about TransferWise: “From early days, TransferWise focused on exposing “hidden” fees by banks and money transmitters. It is a potentially deceptive practice when most providers are advertising to consumers “zero fee” money transfer while charging FX markup. Despite being a lonely voice on this front among competitors, TransferWise continues persevering pushing for legislative changes in UK. Hopefully, TransferWise could accomplish a similarly fantastic momentum in USA with involvement of FTC, CFPB, and other stakeholders. When it comes to its organizational practices, TransferWise is also on the forefront. The startup fosters great teamwork centered on perfecting the user experience, and hires distinctively young-smart people and empowering them with uber autonomy. I think you should read the story and judge yourself.

Again SaveOnSend analysis of the funding and valuation of WorldRemit, TransferWise, Remitly, and Azimo is quite interesting, as well as the future prospects of these companies as they continue to grow. The recent news of TransferWise raising a new investment of $58 million was quite impressive, with participation from previous backers Andreessen Horowitz, Sir Richard Branson, Peter Thiel’s Valar Ventures, Index Ventures, IA Ventures, and Seedcamp.  The company says that they have transferred £3 billion (US $4.5 billion) up to January this of 2015; in April 2014 it had informed that the company had passed the £1 billion transfer mark, a quite remarkable growth. Their average transaction value is high, around £1,500 considerably higher than the rest of the industry. Their client base, which the company describes as “expats who are paid in one currency but spend money in another; sole traders and freelancers who take payments from companies in other countries; retirees who live abroad; and small businesses who have customers paying in different currencies” probably explains the high average; migrants average is less than 1/5 of that depending on the corridor.

In terms of the U.S., SaveOnSend writes, “Up until 2014, Xoom’s transfer volumes and revenues have been growing rapidly. Maybe not as much as TransferWise and WorldRemit’s, but enough to explain why Xoom was allowed, by investors, to avoid for so long international expansion (it still serves only U.S. outbound corridors). However, in 2014, Xoom’s metrics began a rapid decline, and by Q3, 2015, its YoY revenue growth became consistently the lowest among digital providers, including top players, Western Union, and MoneyGram.” TransferWise and WorldRemit arrived in the U.S. in late 2014, but, in the large USA-to-Philippines corridor, Remitly managed to gain 5-10% share of online volume.

Africa — The Latest Fintech Frontier, If Not the Last
February 11, 2016
Are you a PNET Member?