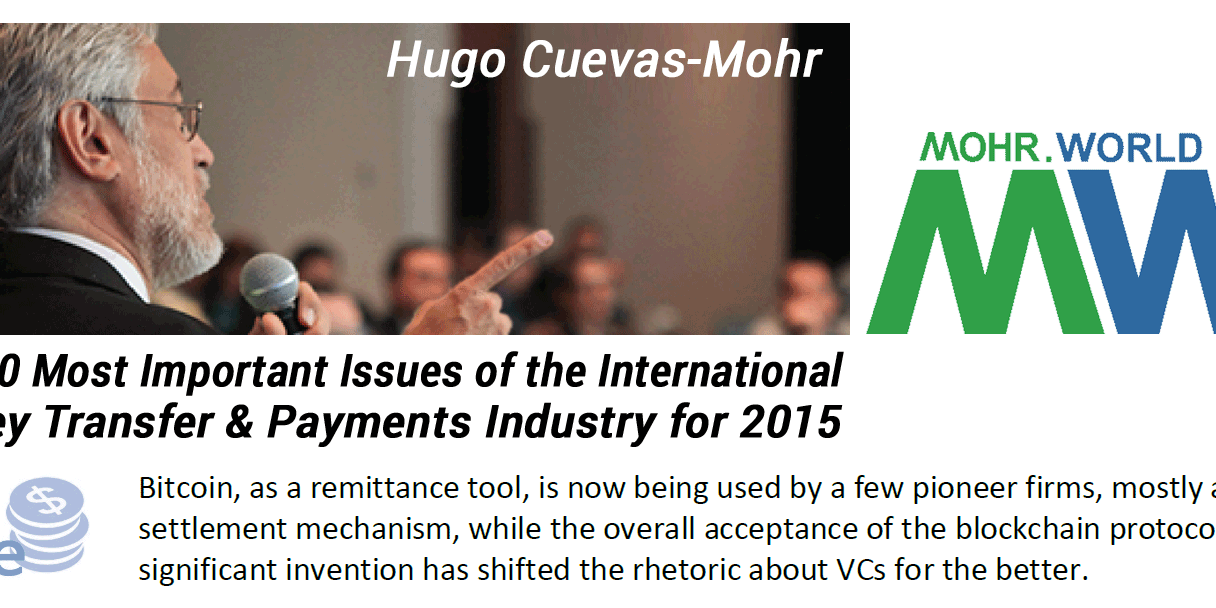 Bitcoin, as a remittance tool, is now being used by a few pioneer firms, while the overall acceptance of the blockchain protocol as a significant invention has shifted the rhetoric about VCs for the better. With MTBIT, at IMTC, we have been actively seeking individuals and firms using blockchain protocols to offer solutions to cross-border customers.
These solutions are provided either directly (bitcoin exchanges selling bitcoin and partnering with other exchanges in other countries to connect sender and beneficiary) or using the VC as a settlement mechanism – firms offering MT services in a corridor and using bitcoin to settle (avoiding bank fees, fiat settlement spreads, funding requirements).

We feel that 2015 was a seminal year for Bitcoin Remittances and 2016 will probably be the year when the efforts of pioneers will crystallize. Pioneers such as Luis Buenaventura (Bloom), Pablo Gonzalez and his group at Bitso, Alex Karis and his group at AirPocket, and Bill Barhydt and his team at Abra, will be challenging not only the industry, but also analysts, regulators, bankers, etc. (read Bill Barhydt’s interview here).

We strongly support all these efforts. Innovation and thinking out-of-the-box is very important.

In a parallel universe, blockchain uses are being initiated, investigated, and developed by a number of Bank and non-bank financial institutions in order to harness the potential of this technology, mostly for internal payment processing functions that could be done more efficiently with its use. Several articles have discussed the potential of technology in the financial industry (Brookings and Star Tribune).

Kyle Torpey wrote two very interesting articles at the end of 2015 (November & December) on Banks, Bitcoin and Blockchains that give the readers a very good idea of what is the state of the industry in relation to Banks involvement in the analysis and use of the new protocols. This quote exemplifies the issue: “large financial institutions have become extremely interested in Bitcoin (or at least blockchain technology) over the past year. While many in the Bitcoin community believe that these banking institutions are not interested in using a decentralized, permissionless blockchain, that does not appear to be the case 100 percent of the time. At Consensus 2015, Barclays’s Simon Taylor explained that the bank is simply interested in finding practical use cases for any sort of new financial technology.”