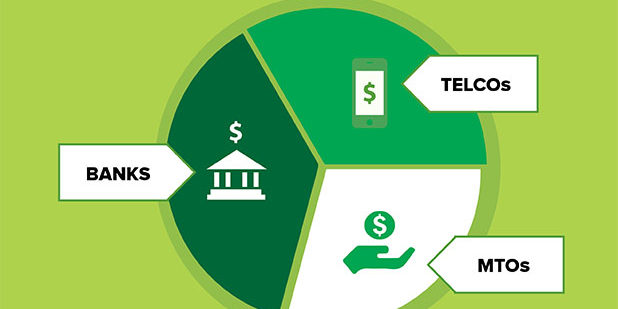 Money transfer is a half a trillion-dollar industry and growing. Given your experience what factors are influencing the remittance market today, and how is this industry likely to evolve?

HC: The money transfer market is in influx right now because operators that have dominated the market for a long time like Western Union, MoneyGram, and others are still dominant today. Banks moved into the market – but some are pulling out and many others are now questioning their role in the market. And, more recently, telcos have moved into the market with their mobile wallets. Those three players are getting into very interesting positions all over the world.

It will take more time in the US for mobile wallets to claim a bigger share of the market domestically and internationally. But this isn’t the case in other markets like Latin America, Africa, and Asia. Regulation is also playing a key role. What will happen in the market will depend on how the battles will play out in every country and region in the world..

While it is clear that money transfer operators dominate this market, in the paying side of the equation telco’s are growing their importance. In your opinion, what role will telecom likely play in mobile money and mobile payments?

HC: I think that some things that are happening, for example, in Kenya, are very interesting. We know about mPesa, the mobile wallet that’s been the probably the most successful in the world, and what’s happening now with Equity Bank, the largest bank. They’ve been trying to work together, but they are fighting for a piece of the market. Equity Bank now has a Telecom license to get into the market with their own mobile wallet because it feels it’s been left out by the telcos. That’s happening in Kenya, but it’s also happening in other countries in Africa.

This is very important to watch – it’s about how the regulators use who can hold money. As more people are using mobile phones, they become the tool for telco’s to reach the customer. But who is going to manage the funds? That’s the key question. Governments are realizing that this could be the best tool for financial inclusion, getting more people to use digital money rather than advancing financial literacy. So that regulation will determine who has more power in the market. As the end of the day, it’s the customer who decides what they want and what’s better for them, but regulation is playing a key role.

In Latin America, where banks have more leverage with politicians, there is regulation in place so that banks are not left out and are forced into partnerships with telco’s. Elsewhere, in the Middle East, the UAE has one of the largest outflows of remittances in the world. There, the MTOs have been dominant for a number of years, and telco’s have recently come to that region. Now, the central bank of the UAE is bringing everyone to the table to decide who will be responsible for what.

In the US, the telco role in terms of mobile wallets has shifted over the last year or two. The initial objective of telco was to try and see if they can control the wallet and get a slice of those transactions, but there seems to be more of a second-generation view now that the telcos are letting others do that, while they simply sell the data. Mobile wallets and all of these features will cause people to use more data and bandwidth, and that’s how the telcos will profit. Is that what you’re seeing in the US?

HC: Yes, in the US, the tier one telcos have that strategy. Also, mobile wallets have yet to catch up in the US market. But in the money transfer market, something else is also going on. The tier 2 and 3 telcos that sell airtime services to migrants – and all migrants use this – are now offering other services. The airtime that these migrants are using, because it’s getting cheaper to call home, is booming. Those same customers go to money transfer operators to send funds to their families. They share that customer. Telcos are therefore trying to figure out how to offer their clients, who use their airtime minutes, remittance services. Some are getting licenses to become money transmitters, and that’s complicated because regulations in each state are complicated. Others are trying to offer financial services with their apps, making the bridge between the two services.

As you are aware, regulatory pressures have caused a number of banks to discontinue their remittances operations. What impact did this have in the remittances industry as a whole?

HC: The situation has really made a large turn in the past year. Regulatory pressure has made a number of banks in the US and the UK drop the remittance operations – like Bank of America, Chase, and TD Bank – and at the same time drop banking money transfer operators.

But the ripple effect in this is that money transfer operators and financial services providers in places like Latin America and the Caribbean are losing their US bank accounts, too. Those companies abroad that need US bank accounts to move money around and better provide their services don’t have international bank accounts, and now their domestic bank accounts are closing down because their correspondent bank in the US doesn’t want those money transfer operations to go through their wire transfer. That situation is getting worse by the minute. There is a lot of pressure not only due to the risk that some banks are taking in having these accounts, but also because of the cost of the compliance to keep these accounts open.

The few banks that are still banking the industry are increasing the cost for MSBs to handle those bank accounts because they have to spend more money on compliance, software, people, etc. So even if the price for money transfer has been dropping, that probably won’t continue. That’s why the World Bank is worried – less competition will mean that prices will go up.

You have recently released an infographic illustrates that while the international money transfer market keeps on growing, the total cost of sending remittances has been failing. What impact does this have to all the different players in this ecosystem (telcos, MTOs and banks)?

HC: The infographic has been an exercise, and besides looking at data like the dropping of remittances worldwide, it tries to summarize the friction points of the players in the industry. It touches on the banks’ continuance problem, the fact that banks are moving away from the remittance market, the problem with no one wanting cash and everyone wanting mobile phones, and transaction costs – how telcos are used to lower margins than MTOs or banks. Branding, too, is very important in this. Finally, it summarizes the affect on financial inclusion, especially in places where the lower class is using mobile phones and services.

So the infographic shows where the battlefields are and what’s happening in each country, offering a worldwide perspective. Those who download it can get a general view, hopefully leading them to reach their own conclusions and help their companies decide what move to make next.

For more information on how the money transfer market is growing and impacting countries around the world, download the IMTC infographic here. For a more detailed document on this issue, download it from here.

The Growth of Migrant Services
October 21, 2019