Meet Patrice Kiiru and His Outlook on African Remittances 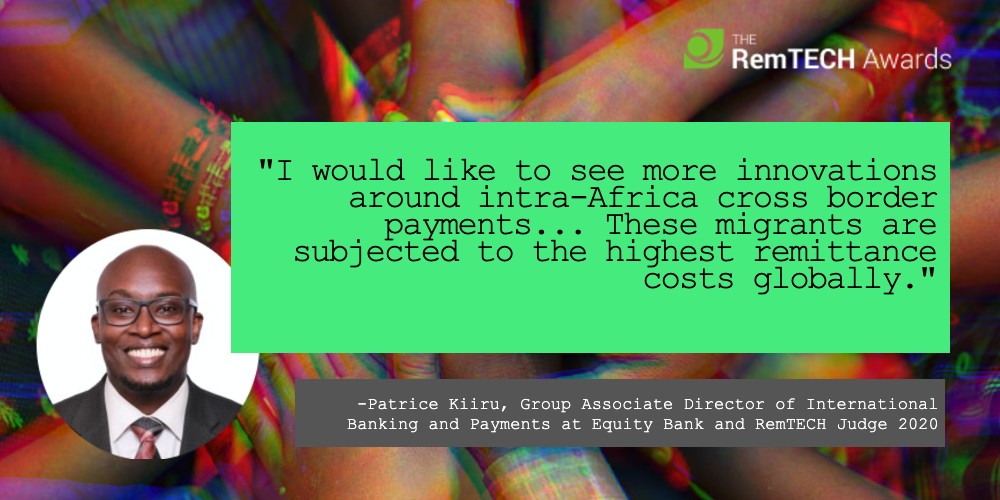 Equity Bank, once technically declared insolvent in 1993, now has more than 9 million customers, more than any other bank in Africa with nearly half of the bank accounts in Kenya. The company’s vision is “to be the champion of the socio-economic prosperity of the people of Africa,” with an agent-based model that has won it awards and has been studied by leading business schools in the world for its improvements in financial inclusion. The Group Associate Director of International Banking and Payments at Equity Bank, Patrice Kiiru, is joining the RemTECH Awards judging panel this year. He speaks to us about his story, work there and what he sees is missing from the market.

Actually most of my banking career (almost 12yrs) was in California and about 5 in Africa? I moved to Southern California in high school with my entire family. My initial banking career was in commercial real estate financing before the Global Financial Crisis. I took almost one year off after that, and spent most of it hiking across many of the mountain peaks in the US. That was when I had an epiphany to move back to Africa and give back to the place I got my start. From that point it took almost 5yrs to finally pull the plug and move back home. I should have definitely done it sooner. There are tremendous opportunities in Africa for returning migrants.

I have been fortunate enough to work for an organization that truly embodies the old adage of “Doing Well by Doing Good”. My role involves supporting migrants to send money to support their families back home and helping them build sustainable investments. I have had the opportunity to support hundreds of thousands of migrants in this capacity. In addition, my team and I have spent countless hours building remittance rails into refugee camps in Kenya, Uganda and Rwanda, to support over 2 million refugees to access life-saving remittances from their relatives abroad.

I would like to see more innovations around intra-Africa cross border payments. There is a huge gap in terms of cost between sending money to Africa from the developed world, and sending money within Africa. Current estimates show that as many as 50% of African migrants still live within Africa. These migrants are subjected to the highest remittance costs globally.

Because Olivia Chow asked me… 🙂  Anyways I have been following the RemTECH awards for the last few years since the inception at the UN HQ. I have always been impressed by the quality of the innovations as well as the breadth and depth of experience of the judging panel. I was very honored to be asked to participate.

Africa — The Latest Fintech Frontier, If Not the Last
septiembre 2, 2020

The Growth of Migrant Services
septiembre 2, 2020
Are you a PNET Member?