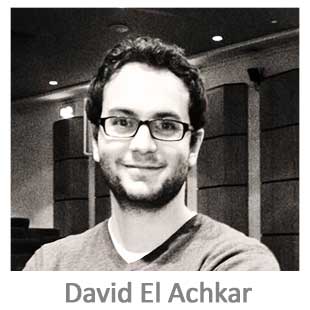 David has worked as a consultant, fundraiser, event director, and mentor… for Fortune 500 companies, not-for-profits, and startups. He was born and raised in Beirut. He then studied in Montreal, worked in Toronto, backpacked Europe solo and he is now between Beirut and San Francisco building Yellow.

As the founder of Yellow, the first Bitcoin payments startup in the Middle East, David is building a suite of products that aim to solve the region’s payment problems. He is also working on multiple Bitcoin educational efforts in the region, including Bitcoin Lebanon, ShuBitcoin.com, the Beirut Bitcoin Meetup, and more.

Previously he was a Management Consultant at McKinsey & Company in Toronto, Canada for 2 years as well as a Enterprise Risk Analyst at Deloitte & Touche for half a year.

He graduated from McGill University in Montreal, Canada as a Bachelor of Engineering (B.Eng.) in Computer Engineering & Management in 2011 where he made the Dean’s Honors List and received the James McGill Award (top 5%) as well as several scholarships. While at McGill David was a Mentor, (providing career and academic advice and helping students with their decisions), a Logistics Director at the Arab Development Initiative (a non-profit organization that encourages youth to creatively solve some development challenges facing the Arab World) and the Executive Coordinator at the TED talks in McGill.

David is also a rock climber, a parkour enthusiast, practices many sports and considers himself a health and fitness aficionado, fascinated by the human body, mind, and behavior.