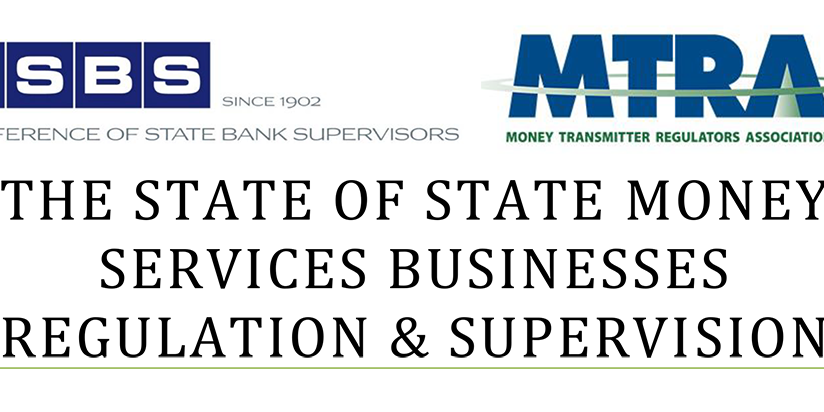 The Conference of State Bank Supervisors (CSBS) and the Money Transmitter Regulators Association (MTRA) released an important report on the state of the industry that is a must read for anyone in the industry and a report that all US Money Transmitters should be sending to their banks. The report is entitled “The state of state money services businesses regulation & supervision” and it examines the non-bank financial sector in the US and the bank discontinuance and de-risking challenges the industry faces. But the main objective is to let the banks know of the strict regulations and close supervision the state regulators have on all licensed MSBs.
Articles have been appearing in the press about the report, such as “Reports: Fearful of Regulators, Banks Turn Backs on MSBs” in the Paybefore Magazine.

Decrease in Number of MSBs

Lalita Clozel, reporter at American Banker, published a well written article entitled “Ranks of Money Transmitters Plunge” in May 25. She starts her article with the sentence: “Money-services businesses registration is commonly seen as a bureaucratic nightmare — and it appears that some companies are throwing in the towel.” It is a conclusion that I don’t agree 100% as I will explain later. Yes, it is true that the number of licensed MSBs in the US have decreased about 12% in the first quarter of 2016, in the numbers released by the report entitled “The state of state money services businesses regulation & supervision” published by the US Conference of State Bank Supervisors (CSBS) and the US Money Transmitter Regulators Association (MTRA). There were 456 licensed companies with at least one money transmitter license in the first quarter of 2016 while the percentage of companies operating over several states increased 5%, to 243.

I do feel that more than the bureaucratic nightmare is the de-risking nightmare that is causing most of the towel throwing outcome. And the report is fairly clear in that sense. Describing the challenges MSBs face, the report begins with the Bank Discontinuance and De-Risking practices of banks: “banks are indiscriminately terminating the accounts of MSBs, or refusing to open accounts for any MSBs, thereby eliminating them as a category of customers. Further, there is evidence MSB agents are unable to acquire or maintain bank accounts, eliminating the capability to perform many of the activities performed for licensed entities.” The report gives the following reasons for this practice: “concerns about regulatory scrutiny”, “the perceived risks presented by MSB accounts” and “the costs and burdens associated with maintaining such accounts”.

“The lack of access to banking services by MSBs may also be partially rooted in a misunderstanding of the degree to which MSBs are licensed, regulated and supervised by state and federal regulatory agencies.” John Ryan, the president and chief executive of the CSBS, said in an interview before the release of the report: “State regulators are looking to create greater consistency of how they are evaluating license applications across the country. We want banks to have a strong understanding of the supervision that some of these non-banks are receiving.”

The report also explains how state regulators are conducting rigorous exams designed to ensure MSBs are safe for banks to partner with as well as working together to act in the case licensed companies are not following strict rules, and cites the case of Braz Transfers in 2013 where US regulators worked with Brazilian regulators to close down this company. State agencies have conducted more than 400 multistate examinations since 2002, including 149 just in 2015. There is also a Multi-State MSB Examination Taskforce that now comprises 49 member states.

Up to now 34 states are using the NMLS system for MSB registration, which also serves to list authorized agents.

Alberto Laureano, chairman of the Money Services Business Association (MSBA), after reading the report stated: “We applaud the joint efforts by the MTRA and CSBS to educate the public and put some perspective into how thorough the vetting of MSBs is at the State level. We truly hope that laying out the standards at which these businesses are held to, and the relevance of the different metrics monitored on a routine basis will be considered by the banking industry in their risk-based approach to increase MSBs access to necessary banking services. We also think that the partnership with NMLS is yielding very positive results in homogenizing criteria and licensing requirements, while also serving as an efficient and user-friendly repository of critical information for easy access by State regulators.”

Every money transmitter should print the report which can be downloaded here and send it to their bank, from bank managers to compliance personnel. We need to make sure every banker that maintains an account for the industry gets a copy of the report.

Customer Expectations In The Payments Industry
May 29, 2016

Risk Management in US MSB Institutions
May 29, 2016