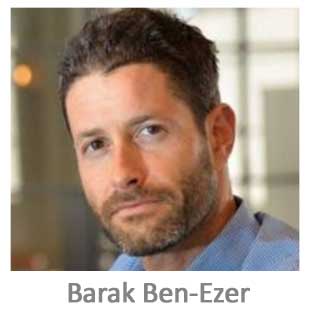 Barak is a serial entrepreneur who has founded (and co-founded) 3 startups and advised other companies in areas of strategy, technology, business development, capital raising, go-to market strategy, and marketing.  He works in both the U.S. and Israel, always interested in operating in the cutting edge of technology and using it to make people’s life easier, better and hopefully more interesting.

His newest start-up is Neema, a dollars to dollars banking system that uses digital currency as the middleman in the background, to move worker’s remittances.  Neema won the Geektime Award in 2014 from a who’s who list of judges (Sequoia Capital, Microsoft Ventures, KPMG, Aol Israel, Shiboleth Capital, Facebook, Qualcom Ventures and Disrupt-ive).

Previously Barak was the Co-Founder, Co-CEO, Director of Business Development of Libra Trade a FOREX and Options Trading Platforms for iPhone, Blackberry, Android, and other advanced smartphones and the Co-Founder, CEO of Libra Festival, the first iPhone applications development studio in Israel, and among the first in the world. Libra Festival incepted, developed and marketed iFog, an entertainment application for the iPhone which was #1 in the appstore in most of the world during Christmas 2008.

Barak was also at Microsoft as a Program Manager for 2 years in their Mobile Devices, Consumer Experience Division. He was part of the Israel Defense Forces in various R&D roles. Barak has BS from Columbia University in New York (2006) graduating with a double major in Computer Science and Economics.