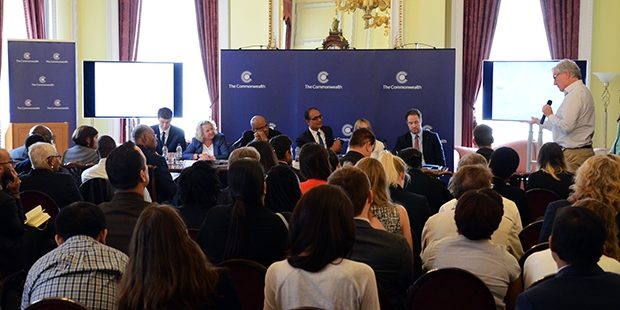 In their post the Commonwealth calls for collaboration on ‘detrimental’ declines in banking relationships and quotes Commonwealth Deputy Secretary-General Deodat Maharaj, who chaired the public meeting, who stressed the importance of protecting countries and communities from corruption and terrorism, but warned that “a one-size-fits-all” approach to regulation does not serve the needs and reality faced by Commonwealth developing countries. the post also quotes from Commonwealth Economic Policy expert Samantha Attridge, Head of Finance and Development Policy, who  clearly stated that “global regulations that are designed to stop money laundering and the financing of terrorism have contributed to this worrying [De-Risking] phenomenon” The post also quotes David Lewis, Executive Secretary of the Financial Action Task Force (FATF), who said his organisation is taking de-risking seriously and that they are examining the issue to determine whether there was “overzealous application” of the regulations. Senior representatives from the British Bankers’ Association, HSBC Holdings, Santander and the Wolfsberg Group were present beside the long list of MSBs and Money Transmitters. Read more here

Judith Rinearson, Partner at K&L Gates, represented the MSBA at the Commonwealth Secretariat meeting and the MSBA post states that “Everyone present agreed that de-risking does not prevent or help money laundering; in fact, there is evidence that it increases the risk of money laundering by moving payments underground. Moreover, attendees commented on how de-risking has hurt the economies of many small developing countries such as Belize, Jamaica and Samoa”.

Judie also mentioned that there were many in attendance that blamed the United States for the wave in de-risking in the world due to the Department of Justice’s enforcement actions that have been aimed at large banks. Banks were also being blamed as they imposed a “one size fits all” approach. The fact that US Banks are forcing correspondent banks in developing countries to close the bank accounts of local MSBs is also fueling the blame aimed at US institutions. Read more here.

<em>Note: If you have not watched this video interview (November 2015) on De-Risking by Rajesh Mirchandani, CGD VP of Communications and Policy Outreach of the Center for Global Development “<a href=”https://www.youtube.com/watch?v=4Hdt8s8R3tc” target=”_blank”>A Call for Action on De-Risking – Podcast with US Treasury Under Secretary Nathan Sheets</a>”. you should watch it. I know that most of the industry does not believe in what US regulators are expressing as US Banks are not reacting to these good intentioned views.</em>

Executive of Corporate Affairs and Public Policy for Jamaica National Building Society, Paulette Simpson discusses in this short Video Interview the benefits of the Commonwealth bringing together different stakeholders involved in the De-risking issue.

If you were present at the meeting we will love to hear your point of view. Contact us